Five new fish species were scientifically described last week, all after former or current U.S leaders who have records of environmental leadership and commitment. Three species are found in Tennessee, which already leads the nation in freshwater fish diversity with 315 species. These new species were formerly considered isolated populations of the wide-ranging Speckled Darter (Etheostoma stigmaeum) but are now recognized as distinct species based on morphology and male breeding colors.

The Speckled Darter (Etheostoma stigmaeum) is less widely distributed than previously thought but still occurs in Gulf of Mexico drainages from Pensacola Bay in Florida and Alabama west to the Red, Atchafalaya, and Saline rivers in Louisiana.

These new species are part of a group of darters (subgenus Doration) that are found throughout southeastern river drainages west of the Appalachians. The new species, described by Steve Layman at Geosyntec Consultants in Kennesaw GA and Rick Mayden at Saint Louis University MO, include Etheostoma obama, the Spangled Darter, found entirely within Tennessee; Etheostoma gore, the Cumberland Darter and Etheostoma jimmycarter, the Bluegrass Darter, both found in Tennessee and Kentucky; Etheostoma teddyroosevelt, the Highland Darter from the Ozark Plateau in Missouri, Arkansas, and the corners of Kansas and Oklahoma; and Etheostoma clinton, the Beaded Darter from the Ouachita Mountains in Arkansas. 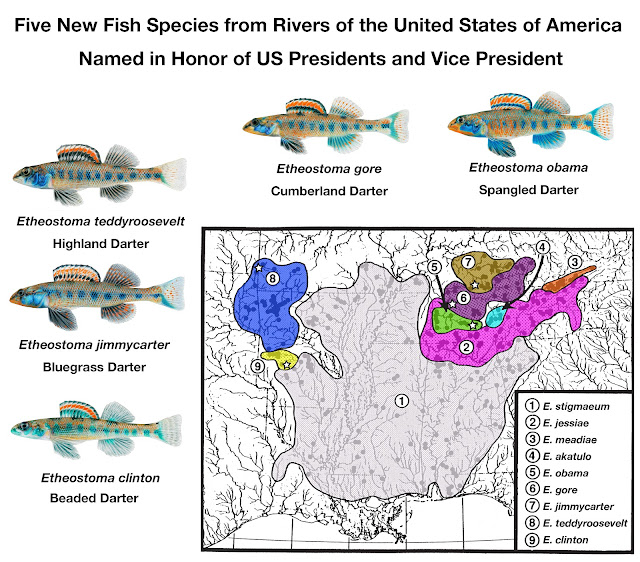 Etheostoma obama, the Spangled Darter is named after President Barack Obama for his policies on promoting clean energy, energy efficiency, environmental protection, and humanitarian effort during challenging economic times. This species is restricted to the Duck and Buffalo rivers in the Tennessee River drainage, Tennessee.

Etheostoma gore is named after former Vice President Al Gore for his environmental vision during decades of public service and raising awareness on the issue of global climate change. In the description the common name was the Cumberland Darter, but that name is already applied to another darter, Etheostoma susanae. The new common name is the Warioto Darter; Warioto is the Shawnee name for the Cumberland River. This species is restricted to the Cumberland River drainage below Cumberland Falls in Tennessee and Kentucky, excluding the upper Caney Fork drainage.

Etheostoma jimmycarter, the Bluegrass Darter is named after former President Jimmy Carter for his environmental leadership in national energy policy and wilderness protection, and his life-long commitment to global social justice and human rights. This species is restricted to the Green River system in Tennessee and Kentucky.

Etheostoma teddyroosevelt, the Highland Darter is named after former President Theodore Roosevelt for his enduring environmental conservation legacy by the designation of national forests, wildlife refuges, national monuments, and national parks, as well as his efforts to establish the American Museum of Natural History in New York. This species is found in the Arkansas and upper White River drainages on the Ozark Plateau in Missouri, Arkansas, and the corners of Kansas and Oklahoma.

Etheostoma clinton, the Beaded Darter is named after former President Bill Clinton for his environmental leadership in expanding national monuments and preserving large expanses of wilderness areas and his continued commitment to global humanitarian issues. This species is restricted to the upper Caddo and upper Ouachita River drainages in the Ouachita Mountains in Arkansas.

All darter illustration by Joe Tomelleri.

This blog was undated on 29 November 2012 to reflect the new common name for Etheostoma gore.

You are correct, Etheostoma susanae is the Cumberland Darter, so E. gore will have to get a different common name!

It's a shame to see such blatant partisan bias in science. There are plenty of people who have done MUCH more for the environment than any politician.

Giving a name to a species reflects the views of the individual who described it formally rather than bias in science. There is a list started on Wikipedia of species named for famous people, including political leaders of all types, comedians, musicians, actors, and many others. Getting to name the species is part of the joy of discovering it!

Probably not many have heard about Otocinclus batmani

Roosevelt was a Republican President. Nothing partisan to see here, move along...

Nixon formed the EPA and passed the ESA, but got no love.

Great point you make there.Five new fish species is a good article.. I like your perspective on this subject.
maximize potential | natural leadership

I really want different types of fishes with unique colors to put it in my aquarium so that my Aquarium looks beautiful and attractive.If anyone have suggestions relavent to fishes please tell ?

How big is your aquarium?

What a juvenile way to name fish species. Some effort at creativity could have been made.